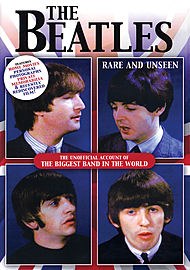 This documentary special tells the true story of the Beatles from their humble beginnings in Liverpool to the break-up of the biggest band in the world. Their story is told for the very first time using original rare film and video footage of the band, including home movies, concert footage, newsreels and photographs from private collections. There are also interviews with those who surrounded the band, and those who were there from the very start. Also included is an exclusive interview with fan and star in his own right, Phil Collins. This documentary is an honest account of what really happened. For the first time, we can see the Beatles relaxed, at play, on and off stage and on film. This is a rare glimpse inside the lives of the most famous band in the world, with additional contributions from: Phil Collins, Steve Harley, Norman Hurricane Smith, Colin Hanton (their first drummer), Sam Leach (tour manager), Tony Barrow (press officer 1962-1968), Tony Bramwell (friend and roadie), Ken Dodd, Tony Booth, Gerry Marsden, Len Goodman, and Sylvie Varten. 1 hour, 30 minutes.