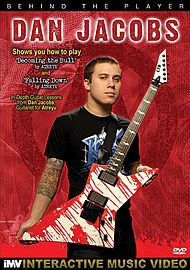 Behind the Player Dan Jacobs

Dan Jacobs is the ripping guitar player from Atreyu. His unique style offers a fresh approach to classic shredding. In Behind the Player: Dan Jacobs, he gives in-depth lessons for how to play "Becoming the Bull" and "Falling Down" by Atreyu—then jams on those songs with Atreyu drummer Brandon Saller. The DVD also includes a behind-the-scenes look at Dan's life as professional musician, the VideoTab system that shows exactly how to play his part in the two songs, and exclusive bonus features.