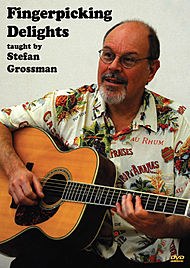 Fingerpicking Delights (DVD)
GW997DVD
by Stefan GrossmanFour original instrumentals all in standard tuning and in different keys are taught in this lesson. These are multipart compositions that should challenge the intermediate to advanced fingerstyle guitarists. Stefan has brought together folk, blues, country and jazz ideas to these solos. Bermuda Triangle Exithas three parts. It begins with a counterpoint section that then leads in to an alternating bass theme and resolves with an R&B fashioned third part. Beyond The Pleasure Dome (also known as Matesa) comes next. This is played in the key of C and brings together several country blues styles to a lyrical instrumental. The Way She Walks is very much influenced by Stefan's many years living in England. He learned the first section from Martin Carthy and then added two additional parts to round off the composition.

Why A Duck is played in the key of F and was originally recorded as a duet with John Renbourn. Stefan's part stands well as a guitar solo and opens up the fingerboard to a variety of interesting chord fingerings.A detailed tab/music booklet is included as a PDF file on the DVD.