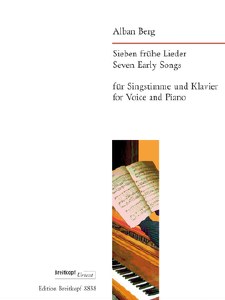 The cycle was put together in 1928, more than 20 years after the composition of the individual songs. From the large amount of songs for voice and piano that he had written in his early years, Alban Berg selected seven of them which he then orchestrated. After serious consideration, he laid down a definitive sequence in which the tempo constantly alternates while the orchestral instruments symmetrically recede before picking up again. Once the piano and orchestral editions were printed, the "Seven Early Songs" quickly conquered concert halls in both scorings. They are still at home on the concert stages of the world today – which is reason enough to present this work by Alban Berg in an Urtext edition following the Violin Concerto. The orchestral material can now be purchased for the first time.