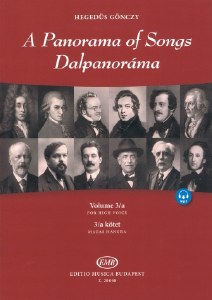 A Panorama of Songs 3/A

A Panorama of Songs fills a want that has been felt for decades. A selection of songs in six European languages from the 16th to themid-20th century encompassing every musical period, it seeks to help beginner-level students of voice teachers and répétiteurs, and foremost the singers themselves. The series brings a breath of fresh air and new works to the conventional Lied repertoire, truly offering a new panorama. Using the means of modern technology it also provides immense help in learning and performing the songs. The three volumes of the series are arranged by level of difficulty, and all of them are available for high and low voices (“a” volumes for high voices, “b” volumes for low voices). Each volume is a complete unit in itself, including all six languages (English, French, German, Italian, Russian, and Spanish) and presenting a cross-section of styles from the early Baroque to the 20thcentury.

Interpretation of the songs is facilitated by literal English and Hungarian translations of their texts, and the reading of the Cyrillic script is assisted by transliteration (again in English and Hungarian). Ornamentation suggestions for the performance of the Baroque works are also included.

The printed music is accompanied by additional useful material to help the learning process, available online at www.emb.hu/downloads. The website contains the piano accompaniments of all of the songs, as well as all the original texts recited by native speakers.

The editor of the A Panorama of Songs series kindly welcomes any feedback, comments, or questions at the following email address: apanoramaofsongs@gmail.com.